From Rural Tribe to Medical School

Not all stories of those living in poverty start with tragedy.

Many children in India fight for their education from the beginning despite financial obstacles. Ajay from India is one such child.

Ajay comes from one of India’s indigenous tribes. He grew up in a remote and rural area, his father barely making ends meet by cultivating a small piece of land. But his father worked hard to support his family by growing rice, pulses and spices. And although Ajay’s community was impoverished and marginalized from the rest of society, he did not let this stop him from pursuing his education.

For Ajay had dreams of becoming a doctor.

He and his younger brother attended a DFN school in the nearby village and progressed from kindergarten all the way through tenth grade.

His grades had always been adequate but as Ajay got older, he realized the importance of achieving academic success so that his dream might come true. In high school, he studied harder and his interest in science grew, particularly in biology.

He also did well in extracurricular activities and played volleyball on the side.

Ajay graduated high school with top marks and began intermediate college courses. By now his ambition to become a doctor was very strong. Who would have thought this possible for a boy from his remote tribe?

Ajay soon found himself at a financial crossroads. In order to continue his studies, he needed to pass an extremely challenging college entrance exam. He needed tutoring, but this would cost his family a fortune.

Believing and supporting him fully, Ajay’s mother sold her remaining pieces of gold jewelry that she had been given as a dowry when she was married. It was a sacrifice she was happy to make for her son’s future.

This sacrifice was not wasted.

Ajay passed the entrance exam and was admitted to study at a reputable medical college in Telangana. 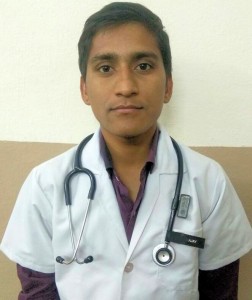 Although Ajay received reduced university fees due to being from a  “scheduled tribe,” it was still not enough.

That’s why we are so thankful to friends like you who help us support young men like Ajay. His DFN school was able to fund the rest of his tuition and Ajay is now on course to achieving his lifelong dream of becoming a doctor!

Give To Education Today

Happy Martin Luther King Jr Day!We are so grateful for the example of a life that worked for justice, equality, freedom and dignity. As many of us enjoy a day of rest, let us also seek ways to honor his example in the ways that we live our lives. 👏🏻 #mlkday ... See MoreSee Less

What does hope look like through the eyes of a student? Let Sameesh show you... ... See MoreSee Less