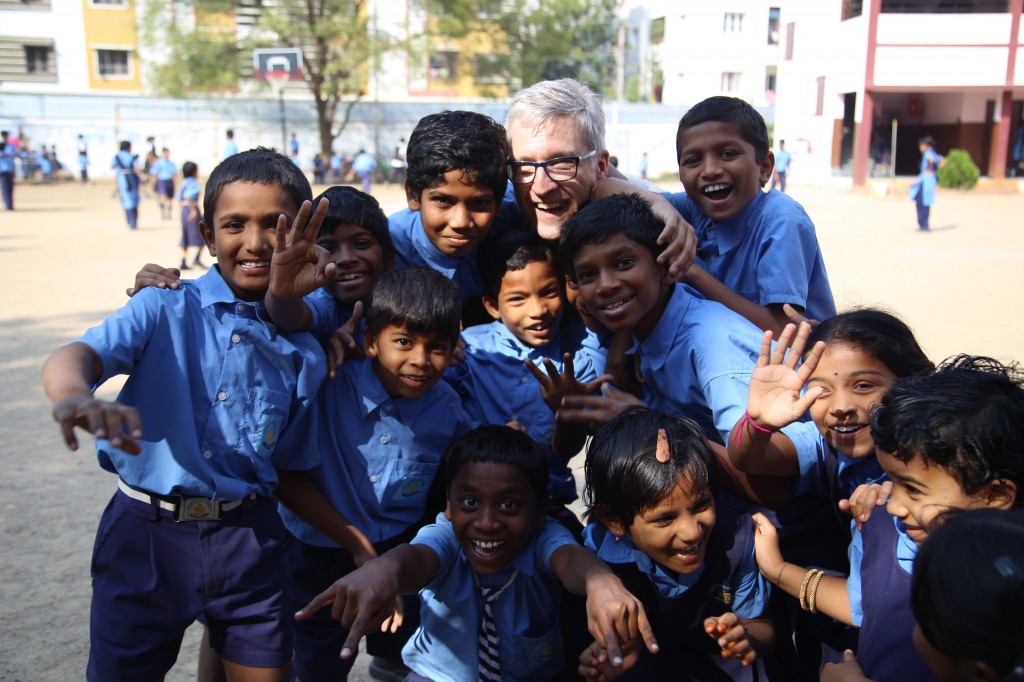 Guest post by a recent vision team member, pictured here with some excited school kids who wanted to pose with the American.

As we left our hotel I saw things the darkness had kept hidden when we’d arrived several hours earlier. To be seeing what to this point had only been described to me as unexplainable was truly… unexplainable. I saw cars and cows, trucks and motorcycles, shacks and shops, pigs and goats, men and women, boys and girls, and that was only within the first minute.

Everywhere I looked was color, motion, congestion, haze, confusion, and beauty. Yes, beauty! The memories I had of other people’s photos were now images coming to life in the lens of my own camera. I assumed I looked conspicuous with my phone always at the ready for photo-ops, but no one seemed to notice. I was just more visual noise in a very overgrown visual landscape. Unexplainable! India! 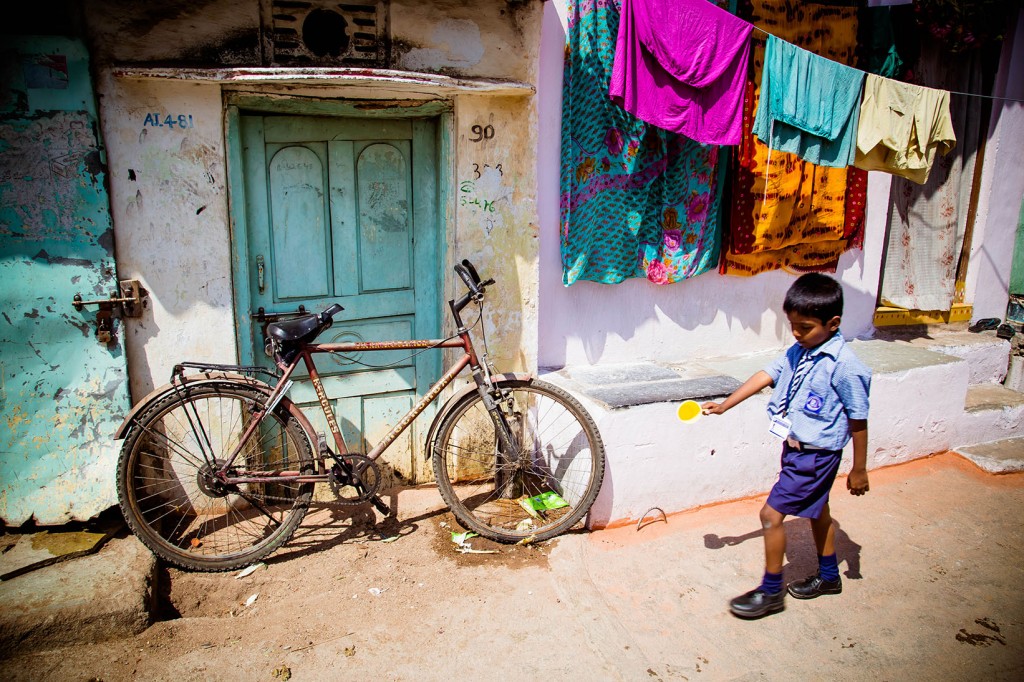 Quiet is never an option in any of the world’s cities, but in India the sounds assaulted me exponentially more than anywhere I’d been before. Mostly what I heard were horns and the engines behind them. I quickly learned that horns are primarily a greeting, but sometimes a warning.

Drivers beep as they approach (“Here I come”) as they pass (“Here I am”) and whenever they think their presence has been forgotten (“I’m still here, in case you were wondering”). On the other hand, they honk when they’re warning (“Get out of my way”)! It only took a day or two to discern the difference between the greeting of a beep, and the anger of a honk.

Periodically throughout the day, a different sort of sound cut through the whine of engines and the beeps and blares of horns. It was the sound calling people to prayer. Reminding them to stop, to gather, and to bow. It wasn’t that the other sounds could no longer be heard but rather a new layer of sound was added, and a new texture temporarily joined the already over-grown audio landscape. Unexplainable! India!

And then there are the scents, or as some would say, the smells. I’ve never experienced anything comparable. Occasionally they pleased my senses but more often, the opposite was true. I’ve heard people say that India has its own scent, and they’re exactly right. I’d describe it as being more blended than singular, and mostly an exhaust of one type or another: cooking, vehicular, biological, manufacturing, and agricultural. Unexplainable! India!

That was Day One. But I will never get over what happened on Day Two. That was the day I visited my first slum. 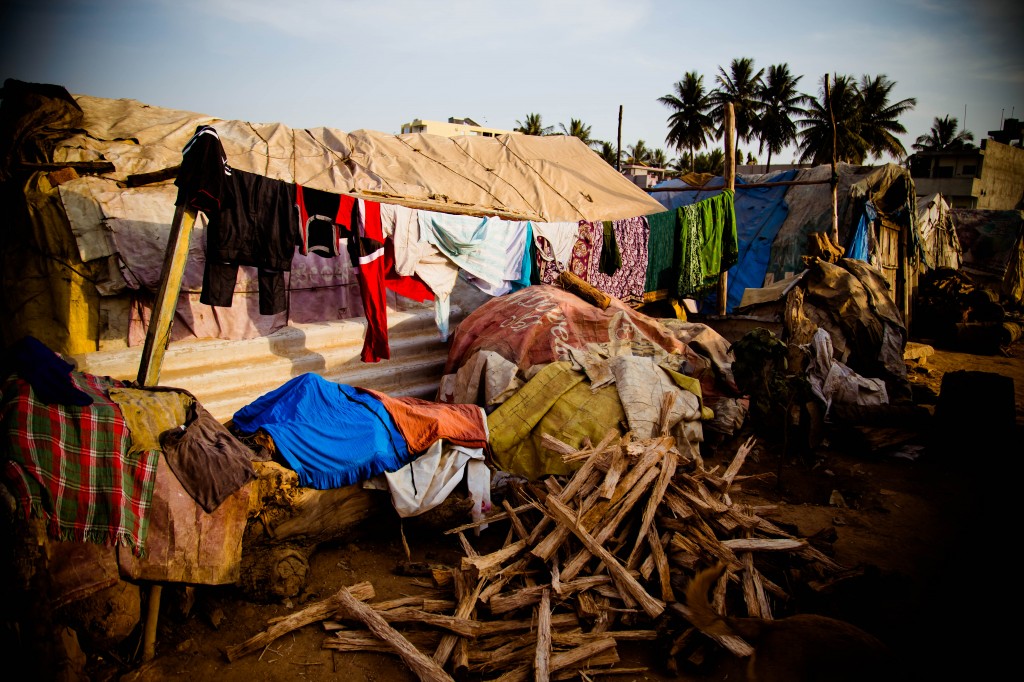 As we pulled into this slum my senses were assaulted and my heart was bruised. We were in what appeared to be a small parcel of leftover real estate, filled with all the same sights, sounds, and scents that I’d already experienced but in a more concentrated space, and in a more concentrated way. We parked in an open section of mud surrounded by trash that was being foraged by wild, black pigs of all sizes. I was not expecting pigs!

As I got out of the vehicle I tried to be careful about where I stepped, and then I realized the futility of my caution. I had no idea what I was walking on and in. I still don’t know. I’m not sure I want to know.

I was part of a team visiting a Good Shepherd school, so in a matter of seconds I was surrounded by uniformed school children greeting me with outstretched hands, warm greetings, bright eyes, and sparkling smiles. Oh those smiles! In the midst of the harshest conditions I’d ever seen were smiles. I was not expecting smiles!

I stood. I watched. I listened. I breathed in the harshness of the air. My mind was racing. My eyes were seeing, but not believing. The bruise on my heart was hurting. And then I heard it. 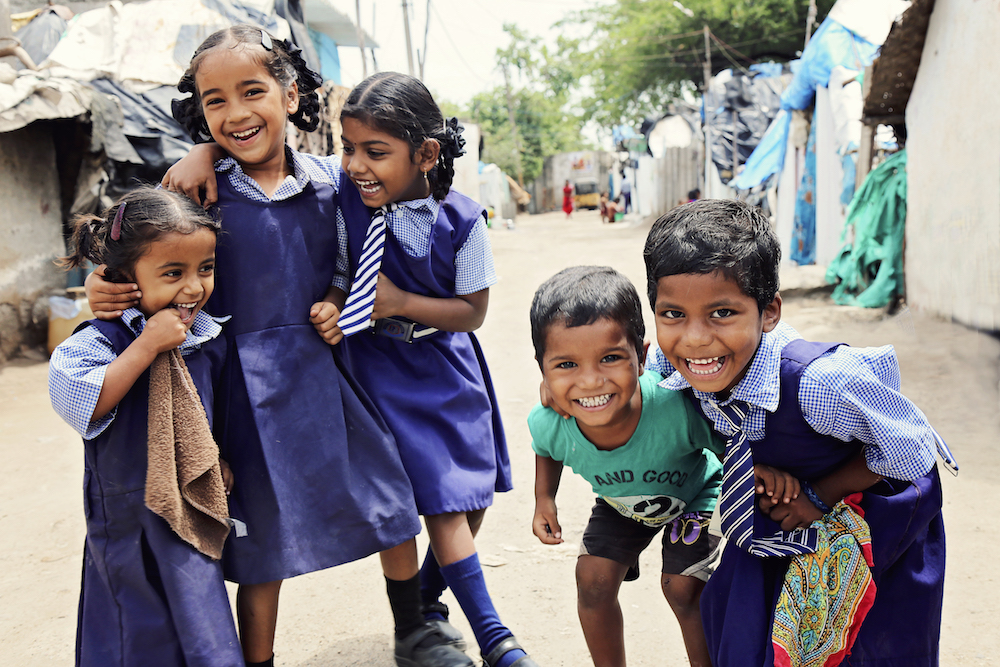 I was done. No, I was undone! My heart was no longer just bruised it was broken. But it was alive. One of the reasons I chose to visit India was to see if my heart was still alive. It was. But I was not expecting it to happen like this!

Hearing those precious, innocent children sing those words with such joy and energy while surrounded by such poverty and need wrecked me in a most beautiful way. I still find it hard to explain why a loving God allows there to be such tremendous pain and need in the world. But I also find it hard to explain why that same loving God brought my heart back to life. Unexplainable! India!

Since I’ve been home each day that I write in my journal I close with: This is the day… rejoice! My life has renewed meaning. Purpose. My heart is alive!

I can’t get them off my mind – those children I met in the slum. There are thousands more in other locations.

Thousands who need a good education.

Thousands who need a reason to smile.

Thousands who need to learn a song.

Thousands who need the opportunity to rejoice!

According to Bruce Wydick, 265 million people will experience acute hunger in the coming year because of COVID-19. One of the best things you can do is give directly to organizations who are feeding the hungry - and thankfully, that’s what DFN does!!

On Becoming Shrewd Samaritans During the COVID-19 Pandemic

by Bruce Wydick and Kent Annan, appearing in Christianity Today online 10/23/20 Particularly in this time of global pandemic, we want to know how to care for our local and global neighbor in ways t...
View on Facebook
·Share