How a Paper Can Change a Life

Neema hunched over her sewing machine, nimble fingers flying, yet gently coaxing the fabric just where she wanted it to go. It was hot and humid in the small hut where she worked, and little beads of perspiration glistened on her brown skin. She scrunched her forehead in concentration as she worked, and her bare feet pumped the foot pedal in perfect rhythm. No electric sewing machine here. Only Neema’s hands, feet, and creative mind powered her machine. On her left were fabrics of all colors and all sizes, waiting for Neema to fashion them into a garment. Maybe her creation would be a festival dress for her neighbor’s daughter, maybe it would be a dance costume for her friend’s niece. Maybe it was a simple blouse for her neighbor to wear with her new sari. At this stage, Neema’s final product was a mystery to anyone watching, especially to those of us visiting her home, but it was clear she worked with creativity, care, and skill. It was also clear she was an expert at her craft.

Neema’s surroundings were humble. A tiny, one-room hut with a dirt floor was home to her three children and her husband’s parents. There were few possessions. But there was a certificate on the thatched wall, framed and hung in a place of honor just above the sewing machine. It was a simple piece of paper in a simple frame, but what it represented was definitely not simple.

Long before our visit, Neema’s husband had left his wife, children, and parents, supposedly to find work in the city. But once he was gone, no one ever heard from him again. In his absence, the family struggled to meet even their most basic needs. Food was scarce and money even more so. When she could, Neema found daily work in a vegetable patch near their hut, but her income was meager and unreliable. She became desperate, afraid she couldn’t give her children what they needed to thrive. To make things worse, it was Neema’s duty to provide for her in-laws even though her husband was nowhere to be found. Her prospects were bleak, and she felt very alone. She had no skills, no education, no hope.

But that was about to change.

Neema didn’t know that a DFN tailoring course was already operating in her village. She didn’t know that she could learn a skill that would provide security for her family, with enough income to feed the family and educate the children. She certainly didn’t know she had any creative ability. So the day Neema’s six-year-old daughter burst into their hut and said, “Guess what, Mommy! There are a bunch of ladies in Aunty Jyothi’s house, and they have sewing machines! They told me to tell you to come see! They said you could learn to sew with them,” Neema was skeptical. “Mmmm hmmm,” she replied while thinking to herself, “I doubt it.” 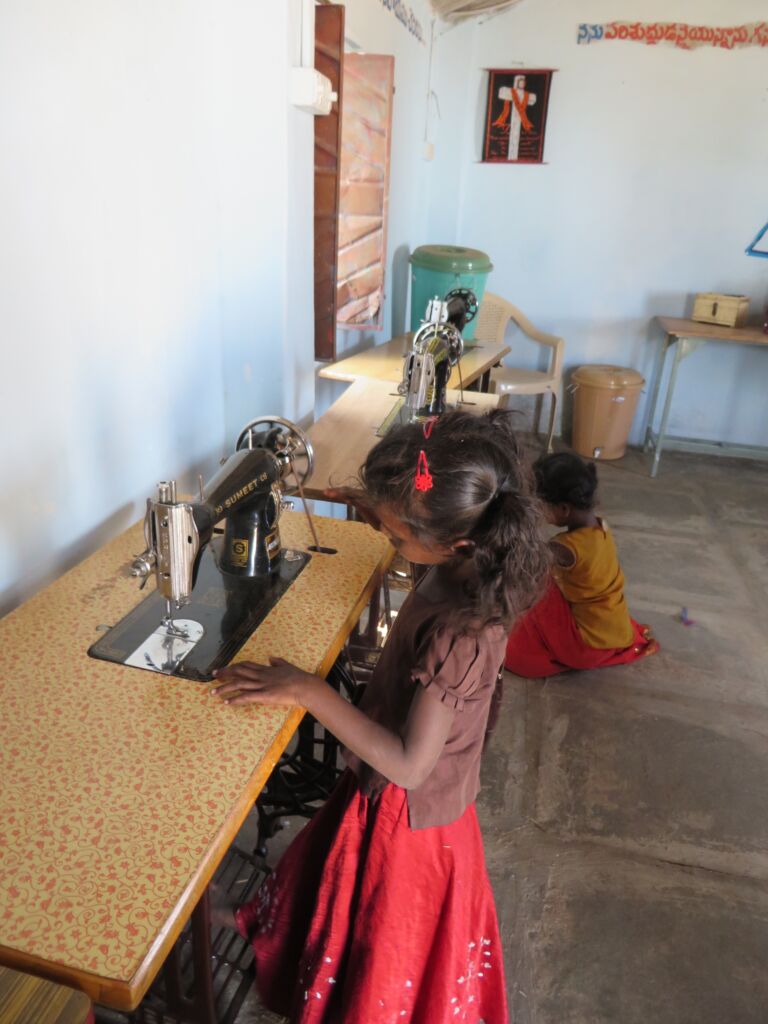 But Neema was curious, so she decided she didn’t have anything to lose by checking it out. She arrived at Jyothi’s house that first day nervous and a little shaky. But she was welcomed with a warm greeting, a chai, and the shy smiles of five other women. There were also sewing machines, and it seemed those were welcoming her, too.

So, Neema got to work. She followed the teacher’s instructions with precision and practiced with diligence. In a matter of weeks, her skill became almost second nature. She discovered she was good at this and she enjoyed creating beautiful and practical things.

For the first time in her life, she recognized she had talent. She learned she could support her family with this new skill, and her artistic vision would set her apart. She also had a new support system, a community of other women to laugh with, to cry with, and to learn with.

At the end of the course, when Neema walked across the stage to receive her graduation certificate –  that little piece of paper now proudly displayed on her wall – her children and her in-laws were in the audience cheering her on. So was her little community of women. So was our visiting DFN team. And, by extension, so were you.

That day, although she was proud to have finished the course, all Neema expected was to get the certificate she had worked so hard to earn. But she got so much more. Along with that piece of paper, she received a brand new sewing machine to start her business, giving her a tangible way to improve her family’s circumstance, a gift she could not have acquired on her own. She also had a tribe, a place to belong, and the hope she could create a brighter future for her family. For the first time in her life, she felt she could hold her head high, secure in her God-given dignity as His beloved creation.

That’s what you do when you lift up a woman. You put life-changing papers on the walls of huts on the other side of the world. You give Neema, and hundreds like her, wings to fly. And when she flies, she carries her children, her extended family, and a whole village with her.

Give a Girl Wings. She’ll fly

Your gift to ‘Promise’ helps to reclaim dignity & purpose for those who were broken by injustice. DFN works with local partners to help restore women, children & families to community with holistic care. Find out more on our website! ... See MoreSee Less