One More Rescued From Child Marriage

When India’s government shut down the country on March 24, they did so to protect their people from COVID. Unfortunately, that decision put thousands of girls like Sravaan at high risk for trafficking.

Sravaan enjoyed almost every day of her life. At 14, she was full of the ups and downs of being a teenage girl. Although extremely poor, there was always enough food and plenty of laughter in her home. Her neighborhood included best friends and grandparents close by. Most importantly, her parents made sure she received the top-notch, English-medium education you as a DFN supporter provide. She loved school and she thrived in the supportive learning environment as a 9th grader.

Then COVID hit. As a migrant worker, Sravaan’s father lost his job and returned home empty-handed. He had no income and no hope of the ability to earn an income. Unbeknownst to his family, he was also seriously in debt. 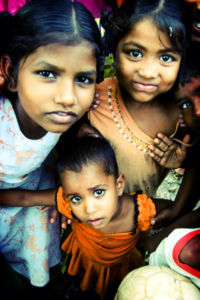 Trapped and afraid, her father proposed an arranged marriage. He offered to sell his young and innocent 14-year-old daughter to a 30-year-old man, already married to another woman. This marriage would wipe out his debt but would hijack his daughter’s future. The wedding was set for mid-July.

Thankfully, child marriage is illegal in India. So is selling your daughter.

You know Sravaan was born for more than this child marriage, but did she? YES! Her teachers ins

tilled in her every day that she was born to fly. Sravaan had plans for her future, plans that included graduating from high school, attending college, and making sure her children would live far above the chains of systemic poverty. Those plans did not include becoming the second wife of a middle-aged man at the age of 14.

Afraid but determined, Sravaan fought bravely against her father’s wishes. As soon as one of our community health workers contacted the police, they confronted the family and found a safe place for Sravaan. Your generosity for COVID Crisis Relief stabilized the family’s income, and Sravaan was able to return to the home she loves. Don’t worry. We’re still checking in on her and making sure her family has all the food they need. And, there is also plenty of laughter filling their meager home.

This fall, Sravaan is back in the school you support. Every day she watches her teacher’s lectures and turns in her homework through the wonder of WhatsApp. She is once again loving her teenage life.

When you give a girl wings she believes in herself. She knows she has God-given dignity and worth. Because you believe in her, she fights for her future. No one can clip her wings, not a selfish 30-year-old man, not a desperate father, and not even a global pandemic.

It takes teachers, mentors, and champions from all over the world to make sure girls in impoverished communities can fly.

This is DFN. This is you.

Yes, Please! Show Me How to Give a Girl Wings.

Do you wonder what healthcare looks like in India in a time of lockdown and isolation?
Read our blog to find out how our health workers are responding...

Using Virtual Medicine In Remote Villages: Our Heroes of the Day

This is what healthcare looks like in a time of lockdown and isolation. A 'normal' day at work for health workers like Leena used to include visits to nearby villages to hold clinics. Leena answered q...
View on Facebook
·Share