Love in the Time of COVID

People fall in love, even in the time of COVID. It’s just a little more complicated.

When Susmita announced her intent to marry Arham, her parents responded with outrage. How could she bring such disgrace upon her family? Arham’s grandmother and great grandmother were Jogini women. That means they were enslaved by the ancient practice of ritualized prostitution. Girls are dedicated at a young age and then become the property of any man in the village any time he chooses. It’s horrific. It’s illegal. Yet it still happens to the poorest of the poor and it carries with it generational stigma and disgrace.

Susmita’s parents believed that Arham had inherited his forebears’ shame and their social position as outcasts. Their daughter —bright, academic, and ready to embark on a teaching career—deserved someone far more respectable. They set about arranging a more suitable match.

Susmita did not care about labels or stereotypes. She was in love. She had known Arham for two years. She believed in his character and in the promise of their future together. In defiance of her parents’ wishes, Susmita ran away from home to be with Arham.

Authorities responded to the missing persons claim filed by Susmita’s parents and found Susmita and Arham after four days of searching. Susmita’s parents forced her to return home. They beat her brutally, then sent her away to a different village, keeping her away from Arham and out of their life. 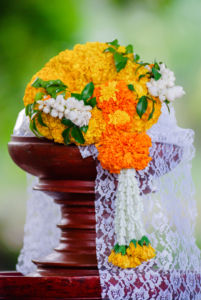 Alone and afraid for her safety, Susmita needed help. That’s when one of DFN’s community workers heard about her situation. Our team first worked to ensure Susmita’s safety and then began negotiating with her parents.

Our mission and your passion to restore dignity to those shunned by society guided the conversation that advocated for Susmita’s marriage to Arham. After multiple discussions in their home, Susmita’s parents finally approved of their daughter’s marriage to the one she loves.

Susmita and Arham held a simple wedding, with honorable love taking the place of traditional finery. Their families came together to support them and celebrate their future. Reconciliation and forgiveness triumphed over ancient stereotypes.

The bonds of prejudice slip a little more each time someone champions human dignity instead of enforcing shame. They break when an outcast becomes loved and accepted.

This is DFN. This is you. Because every life matters.

Our economic empowerment projects have the ability to transform the lives of women escaping trafficking! By connecting them to counselling and teaching them the skills they need to start their own businesses and manage their finances, they’re finally free to control their own lives and support their families with pride! YOUR donations empower women to thrive! ... See MoreSee Less

We’re so happy to share that after many months of virtual learning... our kids are headed back to in-person school! We have lots of procedures in place to keep students and staff safe & healthy while they learn together in classrooms. We can’t wait to see what lessons this year will bring! ... See MoreSee Less